A ‘Turning the Tide’ eco project prevented the equivalent of 19,000 single-use plastic bottles from being thrown out as rubbish during Plastic Free July.

The claim comes from BCP Council in Dorset, UK, and environmental charity City to Sea.

It follows analysis of data from five of 15 newly installed water dispensers on the Bournemouth, Christchurch and Poole seafront. The data revealed that 9.5 cubic metres of water was drawn from the five units which were installed during July. That’s the equivalent of 9,500 litres or 19,000 500ml bottles.

We now have data from five of the 15 newly installed water fountains which shows we have stopped 19,000 single-use plastic bottles from entering our waste stream. 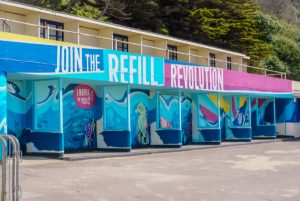 In total, the ‘Turning the Tide’ project has seen 150 water refill points revamped and unveiled. Free drinking water is offered along the 15-mile stretch of seafront. It includes 18 seafront kiosks, more than 130 beachfront taps and 15 newly decorated ‘Hydration Stations’.

The launch of the project was celebrated with the unveiling of a community art project at the lifeguard building at Durley Chine. Created by Paintshop, it depicted sea life and eco-messages about how refill and reuse can avoid plastic pollution.

Jane Martin, City to Sea’s Head of Development, said: “Through Plastic Free July we’ve been monitoring the new water Refill points across the seafront in Bournemouth, Poole and Christchurch and we’ve seen a flood of people refilling their bottles.

“We now have data from five of the 15 newly installed water fountains which shows we have stopped 19,000 single-use plastic bottles from entering our waste stream. This is a huge achievement. Hundreds of people have downloaded the Refill app and we have recorded over 9,000 people using the ‘Superhero Tap’ next to Happy Land.

“I am delighted to see the team’s hard work paying off already. Going forward no pebble will be left unturned as we work out how we can eliminate plastic pollution from the beachfront.”