Belgium to extract drinking water from the sea by 2026

In Nieuwpoort, Belgian companies will soon draw water from the sea in order to create clean drinking water. The technology to do this already exists, but Belgian start-up HydroVolta is the only company in the world to have made the process cheaper and more ecological on a larger scale.

The project, in collaboration with three water companies (Aquaduin, Farys, and De Watergroup), seeks to generate an extra four million cubic metres of water. It is expected the benefits of the project will outweigh the high costs, if the project is launched carefully. Desalination is usually an energy intensive and expensive process, limiting its practical applications.

However, as climate change becomes an increasingly urgent problem, the utility of these projects is only expected to increase. In Dubai and Israel, water desalination is already happening on a large scale. Dubai draws around 90% of its water from desalination plants and Israel is aiming to reach the same target by 2023.

“Now we are looking towards brackish and salt water. The sea is a kind of infinite reserve in long dry periods like this summer,” innovation manager at water company Farys told Het Laatse Nieuws.

In Belgium, similar tests have already been conducted to assess the feasibility of the project. At the De Ganzepoot lock complex in Neiuwpoort, the Plassendale canal channels brackish and salty water from the North Sea. In this body of water, CCRO Technology carried out three months of testing to assess the effectiveness of its water purification systems.

The system used by the company uses a filter with microscopic holes, through which the salinated water is blasted under very high pressure in order to separate salt ions from the water. The company says that it completed these tests, but has not yet disclosed the results.

Our system produces 5 to 7 litres of drinking water per 10 litres of seawater, whereas other technologies barely produce 2 to 4 litre.

HydroVolta will soon conduct its own tests at an industrial-park in Leuven, The company says it is extremely optimistic that its system will work effectively. 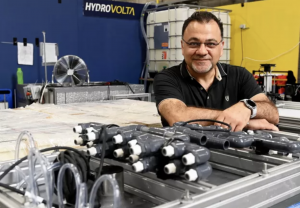 “We are the only ones in the world who can make fresh, brackish, and salt water drinkable with a single device,” HydroVolta CEO George Brik claims, “and with 30% less energy consumption and 50% fewer chemicals than traditional techniques. Our system produces 5 to 7 litres of drinking water per 10 litres of seawater, whereas other technologies barely produce 2 to 4 litres.”

The company says that just one of its devices can desalinate a total of 15 cubic metres of water per hour, which is a record among desalination companies. HydroVolta’s technology uses much lower pressures than those used in the CCRO tests and passes electricity through the water to help remove salt ions.

The Belgian start-up hopes to quickly spread this technology across the world, aiming its sights on brackish lagoons in India, the salty North Sea, and even extremely salty Mediterranean waters. Last year, HydroVolta received €2.3 million in EU funding to help boost the project.

Belgium suffers from high levels of water stress and droughts, which are increasing in frequency, have made the drinking water situation in the country significantly more unstable. Additional volumes of clean drinking water will help Belgium during the tough, dry summer months.

Each year, Belgium depletes its renewable water resources at one of the highest rates in northern Europe. A 2019 report by the World Resources Institute concluded that Belgium was the 23rd country most likely to experience drinking water shortages.